Another interesting article… Take heed you Queens of Cardio!

That’s how my associates and I train our fitness-oriented clients. To help them achieve a more productive, healthy and happy life, optimize the time they spend in the gym and achieve total fitness, we carefully supervise them through a series of high-intensity, low-force weight-training exercises. We accomplish that in two workouts a week averaging 20 to 30 minutes.

The major problem in the field of bodybuilding and fitness is the near-universal—but erroneous—belief that more is better. As children many people acquire the notion that more candy is better than less, then blindly misapply that notion to other areas. Past a very definite, limited point, candy makes you sick and fat and causes dental problems.

If more is better, why train only two or three hours a day? Why not take a vacation from work and train 18 hours a day? Then you’re sure to succeed, right? By the way, those stories about movie stars training five hours a day to get in shape for films are bunk. No one except a slave under a whip can sustain the motivation to train that much day in and day out. Females, especially, with their naturally lower testosterone levels, simply can’t tolerate as much high-intensity-exercise stress as some are reported to be engaging in.

I’ve visited gyms in every corner of the world. Most people train at least three days a week for one hour per session. Why? It just so happens that in our culture the number three has a certain traditional magic. We have the Three Bears, the Three Stooges, the Holy Trinity, three square meals a day and the mystic concept that catastrophes happen in threes. Therefore, it’s only logical and scientific that we should train three times a week.

The lunatic fringe in the field of bodybuilding has turned exercise into a religion of sorts, spending hours every day of the week mindlessly pumping iron, stretching, jogging and so on. Those people don’t exercise as a means of achieving a single, albeit important, value with a hierarchy of numerous other life-affirming goals. For them going to the gym is a social ritual that helps them manage the anxiety that inevitably results from the refusal to learn how to think and judge as mature, independent adults.

While it may be laudable on one level to make it to the gym four to six times a week for two hours of training per session, on another it isn’t. The idea shouldn’t be to go to the gym to prove that you’re a good Puritan but to go conscientiously prepared to do what nature requires in the way of imposing the requisite training stress—and in the right amount.

There’s no question that being in good physical condition is an absolute requirement for living a rewarding, happy and healthy life; however, it’s neither necessary nor desirable to spend an hour or two every day to achieve it. It’s not necessary, as optimal results—total fitness—can be achieved by doing well under two hours of resistance training a week. Any more than that and you’re spending more time pursuing a particular value than a normal life demands.

Even Kenneth Cooper—the man responsible for single-handedly launching the aerobics movement—recanted, stating that he was wrong all those years, that more exercise is not better than less. A while back Dr. Cooper and his associates at the Cooper Aerobics Center in Dallas became alarmed at the rising incidence of serious medical problems—heart disease and cancer—among clients who jogged six days a week, some of whom threw in three days a week of weight training for good measure. They were purists, people who exercised, didn’t smoke, drink alcohol or eat much in the way of fats. Cooper was stymied at first, but by the end of the investigation he determined that overtraining was the cause. 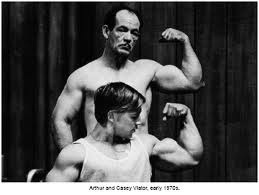 After the Colorado experiment, Arthur Jones wanted to do another controlled study at a university, he sent out feelers to Ohio State, Georgia Tech and Clemson but they were slow to commit. Then he was told that West Point had bought a full line of Nautilus equipment, after negotiations where everything would be funded by nautilus and also provide training, West point would provide subjects and measurement evaluations for the 1975 study.

Jones believed that HIT would strengthen muscles, heart and lungs and increase flexibility without the pounding of running. The study was to test this contention. He even obtained some of Dr. Ken Cooper’s (Aerobics creator) colleagues to conduct the cardio fitness tests, to head off skepticism about results. The majority of subjects were 2nd and 3rd string football players, the coach wouldn’t let 1st stringers take part. The workouts were brutal HIT, AJ (Arthur Jones) style. Don Shula the Miami Dolphin football coach came in for a day. Jones even set up an after hours program so other West Point coaches, faculty and families could take part. That program was called Project Total Conditioning.

After 6 weeks the study was complete 19 subjects doing HIT with 16 in a control group. The results:

Muscular Strength. After 17 workouts, the HIT group increased an average of 59% on ten exercises. There was no strength gains by the control group.

Cardiovascular Endurance. Subjects were wired with continuous EKG and blood pressure, tested several ways including an all-out test on stationary bike and a two mile run. The HIT group was significantly better on all heart rate and blood pressure tests than the control group during all types of exertion. The two mile run showed the only negative, The Hit group’s average time was reduced by 88 seconds, while the control group ran it 20 seconds faster than their average.

It was felt that he showed HIT and the nautilus machines build strength, cardo improvements and flexibility at a higher rate than standard training.

Several members of the West Point faculty wrote books on HIT they were sold on HIT including Dan Riley a premier strength coach at Penn State, Washington Redskins and the Huston Texans, always teaching HIT to players and other trainers along the way.

Error: Twitter did not respond. Please wait a few minutes and refresh this page.