Lose fat fast with a training program that will help you maintain body composition results for the long run. You will lose the most fat by training with a protocol that focuses on building muscle, burning fat and calories, and achieving the greatest hormone response from exercise. This article will give you my top five tips for incorporating those three strategies into a training program for fat loss.

Be aware that correct nutrition is necessary in order to achieve significant fat loss. It’s near impossible to out-train a bad diet. If you were able to do so, you would undoubtedly compromise your health in the short- and long-term.

The Run Down on Training for Fat Loss
The first goal of training for fat loss is to elevate your resting metabolic rate (RMR) by increasing muscle mass because this means you will burn more energy every day. The RMR makes up the bulk of energy you burn. Burning energy in addition to the RMR when working out is great, but the impact on total energy burned is fairly small compared to the total RMR.

Your workout time needs to include both strength training and anaerobic conditioning because both contribute to muscle building and they burn energy. The magic of strength and anaerobic training is that they boost your overall metabolic rate, burn a lot of energy in a short period of time, and elevate the RMR by increasing the amount of lean mass you have. Strength training and anaerobic conditioning affect the body differently than aerobic training, regardless of the intensity of that aerobic exercise, which means they will always be the priority for fat loss and body composition.

Tip #1: Train A High Volume, Short Rest Periods & Moderate Loads
Strength train with a high volume of work, short rest periods, and moderate to heavy loads using multi-joint exercises. Squats, deadlifts, pulls, presses, lunges, and rows should make up the core of your training. A program that generally can be manipulated for a greater muscle building effect.

Use challenging weights in the 70 to 85 percent of maximum range with short rest periods that give incomplete recovery. This will provide a significant anabolic response by elevating fatloss hormones. High reps and short rest intervals will make your body a high-powered energy burning machine. 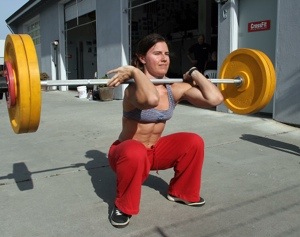 Growth hormone (GH) increases fat breakdown and the metabolism of glucose and amino acids. It increases protein building and avoids lean tissue loss when you are trying to lose weight. GH is released by the body in greater quantities in response to physical stress above the lactate threshold, which is the reason heavy, high volume total body training with short rest periods (30 to 60 seconds) is necessary.

Go Fast – Go Slow
GH is produced in bursts by the pituitary gland at night during rest, and women get the body comp benefit by elevating GH just as much as men. In contrast, the effect of exercise on testosterone for women is much, much smaller. GH is also involved in the release of another anabolic hormone, insulin-like growth factor-1 (IGF-1), which is important for protein synthesis. Manipulating time under tension with a varied lifting tempo or inter-repetition pauses is one of the best ways to boost IGF-1.

Tip #3: Perform Strength Training Instead of Aerobic Exercise
Strength training that is anaerobic, uses a high volume and intensity, and is made up primarily by traditional multi-joint lifts is always superior to aerobic exercise for fat loss. The evidence is clear on this, but because some studies have used inadequate resistance training protocols (single-joint exercises at a low intensity) to compare resistance and aerobic training, the fat loss outcome has not always favoured strength training.

Plus, for some unfathomable reason, the media and many public health professionals suggest aerobic training, especially continuous, slow exercise, will help you lose fat, which is one of the most drastic misconceptions about weight loss and exercise. Strength training is anaerobic by nature—the opposite of aerobic—meaning it elevates fat burning hormones and burns energy, as mentioned above.

For example, a study in the journal Medicine and Science in Sports and Exercise compared fat loss in three groups of overweight subjects. All groups were on a fat-loss diet and one group only did the diet with no exercise, whereas a second group did the diet with aerobic training, and a third group was on the diet and did strength training. The diet group lost 14 pounds of fat, while the aerobic group lost 15 pounds of fat—only one pound more, which was not statistically significant. The strength training group lost 21 pounds of fat, which was 34 percent more than the aerobic group!

Consider the amount of time spent on aerobic exercise (36 sessions of up to 50 minutes each) for only one extra pound of fat loss! The six extra pounds lost in the strength training group is worth it, but one pound?!

Tip #4 Do High Intensity Anaerobic Training to Burn Fat—Avoid Continuous Low-Intensity Aerobics
Perform high-intensity anaerobic training (HIAT) to burn fat and avoid aerobics. There’s a mountain of evidence that anaerobic conditioning is effective for fat loss. HIAT is much more effective than aerobic training, whether it be steady-state aerobic activity or higher intensity aerobic exercise. HIAT works on the same principle as strength training for fat loss. It increases protein synthesis and can build muscle, although not as much as strength training.

A study in the International Journal of Obesity demonstrates this by comparing the effect of 15 weeks of HIAT (60 cycle sprints of 8 seconds each, 12 seconds rest) with aerobic exercise (60 percent of maximal oxygen uptake for 40 minutes). The HIAT resulted in significant decreases in overall fat mass of 1.5 kg, while the aerobic exercise group had a fat gain of 0.44 kg on average. The HIAT group also had a significant 9.5 percent decrease in belly fat, whereas the aerobic group increased belly fat by 10.5 percent at the end of the study. Of related interest is that the HIAT group decreased fasting insulin significantly more than the aerobic group (31 versus 9 percent), indicating better metabolism.

A second study in the journal Metabolism is indicative of the research supporting the superiority of HIAT over aerobics for fat loss. This study compared 20 weeks of aerobic training with only 15 weeks of HIAT in which participants did 15 sprints for 30 seconds and lost nine times more body fat than the aerobic group. They also lost 12 percent more visceral belly fat than the aerobic group.

What is so interesting about this study is that the energy cost of the aerobic program over the whole study period was 28,661 calories, whereas for HIAT it was less than half, at 13,614 calories. In less time, the HIAT group lost much more weight—nine times more weight. How do researchers explain it?
HIAT also boosts GH and T much more than aerobic training, which we’ve already seen helps create an anabolic environment and burn fat. HIAT results in something called post-exercise oxygen consumption (EPOC), in which metabolism is elevated to a significant degree after training—the body is using more energy even though you’re not working out anymore. EPOC is elevated more when anaerobic training is involved—strength training and HIAT can elevate EPOC for as much as 38 hours post-workout.

Emerging research provides additional insight into why HIAT works and steady-state aerobic exercise doesn’t. A study in the European Journal of Applied Physiology showed that a HIAT program elevates the expression of gene activity by nearly 75 percent over aerobic exercise. A 15-minute HIAT protocol enhanced the activity of 69 genes that were not activated by a 30-minute aerobic trial. The genes that were upregulated were involved in energy metabolism and hormone growth factors such as GH and IGF-1. Basically, greater gene activity from anaerobic training explains what is going on “behind the scenes” in the body to build muscle and burn fat.

The one possible drawback to HIAT is that it is mentally challenging to push through an all-out workout even if it is short. There is an upside: research shows that near-maximal intensity sprints (greater than 90 percent of max oxygen uptake) can be completed in 10 to 20 minutes depending on the number of sprints and interval lengths.

Tip #5: Be Active in Daily Life to Improve Metabolism and Lose Fat
A sedentary lifestyle, even if you are already training at a high volume and intensity, will compromise metabolism and may lead to fat gain. Long periods of inactivity, even a few hours during the day, will lower the body’s glucose tolerance and insulin sensitivity. This puts you at risk for diabetes and poor body comp.

Desk jobs are the primary culprit for fat gain and inactivity during the day in people who train hard. Studies have shown that in people who have a lean body composition and perform regular intense exercise suffer from a significant drop in metabolism if they are inactive for even a short period of time, as measured by glucose tolerance and insulin health.

For example, a recent study tested the effect of decreasing daily activity for three days in a group of lean, active individual with training experience. They normally averaged 12,956 steps a day and reduced their activity to 4,319 steps a day (they were told to take less than 5,000 day as measured by a pedometer and confirmed with an accelerometer), which resulted in a 30 percent drop in insulin sensitivity.

Blood sugar imbalances are another side effect of long periods in which you don’t move. The result is a slower metabolism, a lower resting metabolic rate (remember RMR from the beginning of this article?), and ultimately fat gain.
Take away a commitment to being more active and inspiring your loved ones and kids to do the same. Make sure you have incorporated tips 1 to 4 into your lifestyle and are strength training and performing high intensity intervals. Don’t forget, you can’t out-train a bad diet or overeating.

Take regular brisk walks—even a five to ten minute vigorous walk will make a difference. Shoot for 10,000 steps a day. Avoid plopping down in front of the TV or computer for hours after work. Extra physical activity can take the form of recreational sports participation, playing ball games, martial arts practice, bike riding, or whatever you enjoy.

If you have a sedentary job, always take the stairs and park farther away in the parking lot. Break the work day up with relatively brief spurts of physical movement, whether it is walking, body weight exercises, or more strenuous training. Even stretching, fidgeting, and getting an adjustable desk so you can stand as well as sit will help.