Time to Focus on Healthier Drinks
Steps that consumers, soft drink makers, and government can take to cut back on sugary drinks.

An article from Harvard Public Health

The Problem: Sugary Drinks Are a Major Contributor to the Obesity Epidemic
Two out of three adults and one out of three children in the United States are overweight or obese, (1,2) and the nation spends an estimated $190 billion a year treating obesity-related health conditions. (3) Rising consumption of sugary drinks has been a major contributor to the obesity epidemic. (4) A typical 20-ounce soda contains 15 to 18 teaspoons of sugar and upwards of 240 calories. A 64-ounce fountain cola drink could have up to 700 calories. (5) People who drink this “liquid candy” do not feel as full as if they had eaten the same calories from solid food and do not compensate by eating less. (6)

Beverage companies in the US spent roughly $3.2 billion marketing carbonated beverages in 2006, with nearly a half billion dollars of that marketing aimed directly at youth ages 2–17. (7) And each year, youth see hundreds of television ads for sugar-containing drinks. In 2010, for example, preschoolers viewed an average of 213 ads for sugary drinks and energy drinks, while children and teens watched an average of 277 and 406 ads, respectively. (8) Yet the beverage industry aggressively rebuffs suggestions that its products and marketing tactics play any role in the obesity epidemic. (9) Adding to the confusion, beverage industry-funded studies are four to eight times more likely to show a finding favorable to industry than independently-funded studies. (10) This fact sheet assembles key scientific evidence on the link between sugary drink consumption and obesity.

The Evidence: Soft Drink Consumption Is Rising and Harms Health
Sugary drink portion sizes have risen dramatically over the past 40 years, and children and adults are drinking more soft drinks than ever.

A 20-year study on 120,000 men and women found that people who increased their sugary drink consumption by one 12-ounce serving per day gained more weight over time—on average, an extra pound every 4 years—than people who did not change their intake. (19) Other studies have found a significant link between sugary drink consumption and weight gain in children. (20) One study found that for each additional 12-ounce soda children consumed each day, the odds of becoming obese increased by 60% during 1½ years of follow-up. (21)

People who consume sugary drinks regularly—1 to 2 cans a day or more—have a 26% greater risk of developing type 2 diabetes than people who rarely have such drinks. (22) Risks are even greater in young adults and Asians.
A study that followed 40,000 men for two decades found that those who averaged one can of a sugary beverage per day had a 20% higher risk of having a heart attack or dying from a heart attack than men who rarely consumed sugary drinks. (23) A related study in women found a similar sugary beverage–heart disease link. (24)

A 22-year study of 80,000 women found that those who consumed a can a day of sugary drink had a 75% higher risk of gout than women who rarely had such drinks. (25) Researchers found a similarly-elevated risk in men. (26)
Cutting back on sugary drinks can help people control their weight. 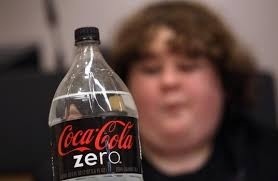 Studies in children and adults have found that reducing sugary drink consumption can lead to better weight control among those who are initially overweight. (27,28)
References
1. Ogden CL, Carroll MD, Kit BK, Flegal KM. Prevalence of obesity and trends in body mass index among US children and adolescents, 1999-2010. JAMA. 2012;307:483-90.